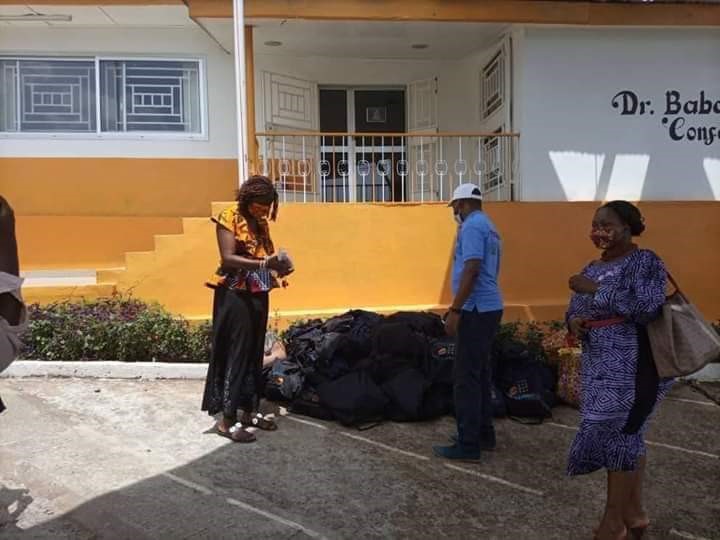 The Minister of Youth Affairs, Mohamed Orman Bangura and the UNFPA have played major roles in seeking the welfare of Sierra Leonean citizens recently repatriated from Kuwait.

Dignity kits, cash and other assorted items form part of the supplies received by the returnees since they arrived in Sierra Leone weeks ago.

This support emanated from a request made by the youth minister to its development partner seeking welfare support for the 86 young Sierra Leoneans recently repatriated and quarantined at the College of Medicine and Allied Health Sciences (COMAHS) Holding Centre at Jui in line with the country’s covid-19 policies.

The returnees have been in close contact with the Government through the Honourable Minister of Youth Affairs who about a week ago provided assorted items to them.

The minister has been working effortlessly to seek the welfare of this group of Sierra Leoneans as he has been doing for various other sets of youth groups across the country since his assumption of office.

Minister Bangura also presented a cheque of Ten Million Leones (Le 10,000,000) to the returnees as a step in response to their request for repatriation support to their various destinations across the country after the expiration of their quarantine period.

“I note your concerns and I am doing this from my pocket to demonstrate commitment on the part of this government that we care for our citizens. I implore you all to go back to the society and serve as change makers after this challenging period in your lives. Forget the stigma and go back and do what you used to do before traveling. I promise to keep in touch with you through your leaders,” the minister encouraged them.

The head of the returnees, Ms Zainab expressed appreciation to the minister for his role in seeking their welfare since their return to the country.

She said the support was timely, while invoking God’s blessings on the minister and government.

“Since we arrived in Sierra Leone from Kuwait you are one person that has been with us through thick and thin and for that we thank you sir. You are a blessing to this country” she pointed out.