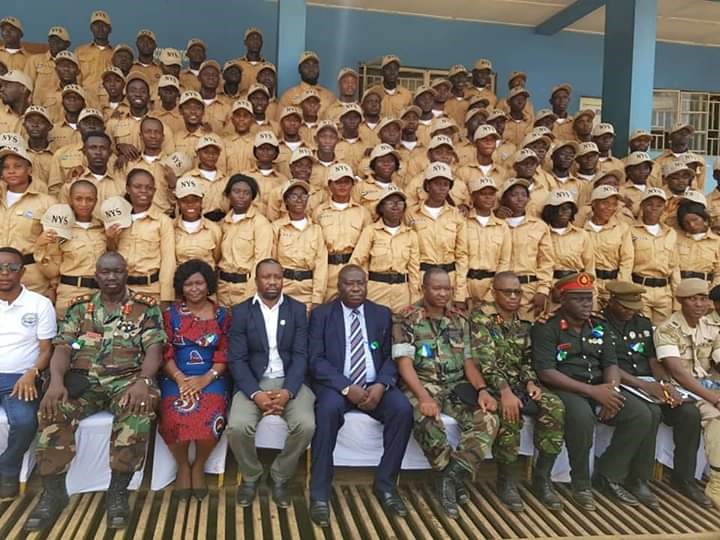 At the National Youth Service (NYS) Passing Out and Swearing-in ceremony, the Minister of Youth Affairs, Hon. Mohamed Bangura encouraged 371 University graduate Corps members to be dedicated to national service in order to build a prosperous Sierra Leone.

At the National Youth Service (NYS) Passing Out and Swearing-in ceremony, the Minister of Youth Affairs, Hon. Mohamed Bangura encouraged 371 University graduate Corps members to be dedicated to national service in order to build a prosperous Sierra Leone.

He was speaking at the Peace Mission Training Centre (PMTC), Rogbangba at Hastings in the east end of Freetown where hundreds of family members gathered to cheer up their sons and daughters.

Minister Bangura said the second batch will now be part of history, in fulfillment of more than 50 years dream of one of our forefathers, Sir Milton Margai.

“I was here in September 2018 at the official inauguration of the first batch of 200 graduate corps in compliance with our pronouncement in 2018,” he told the motley crowd. He went further to remind them that, “During his maiden address in the Well of Parliament, His Excellency, President Julius Maada Bio said that the NYS will be used as a vehicle to reducing youth unemployment and promote skills development, innovation and entrepreneurship for self reliance.”

The scheme, he continued, provides newly qualified graduates with opportunity to obtain practical job experience in the public and private sectors of the economy.

According to him, President Bio’s statement has yielded dividend with the recruitment and deployment of 200 graduates who were engaged in selfless national service across the country. He informed that those graduates were recently certified at the YWCA old hall in a colourful occasion.

Given an overview of the NYS, the Executive Director, Onanah Jalloh said the Sierra Leone Parliament enacted the National Youth Service (NYS) Act and gazette as Vol.CXLV11 No. 17 in March 2016.

He disclosed that the NYS is a national program that promotes youth participation in governance and community development.

Today again, “we are witnessing the passing out and swearing-in of the second batch of graduate Corps.”

Out of the over 1000 applicants, the NYS Executive Director said only 500 were shortlisted and recruited in preparedness for the 21 days orientation at the PMTC.

Unfortunately, a day to their deployment for the 21days rigorous training, a total number of 129 took a different route.

He explained that out of the 500, only 371 remained steadfast and continued until the end of the 21 days.

Representing the Chief Justice, His Worship Justice Deen Tarawallie said the administration of oath is very important and therefore encouraged them to be steadfast and have in mind that they are going out for a one year national service.

He told the Corps members that Section 30 of the NYS Act makes it mandatory for a Corps member to take Oath of office before deployment.

The UNFPA representative pledged commitment and assured of continuous support to the NYS.