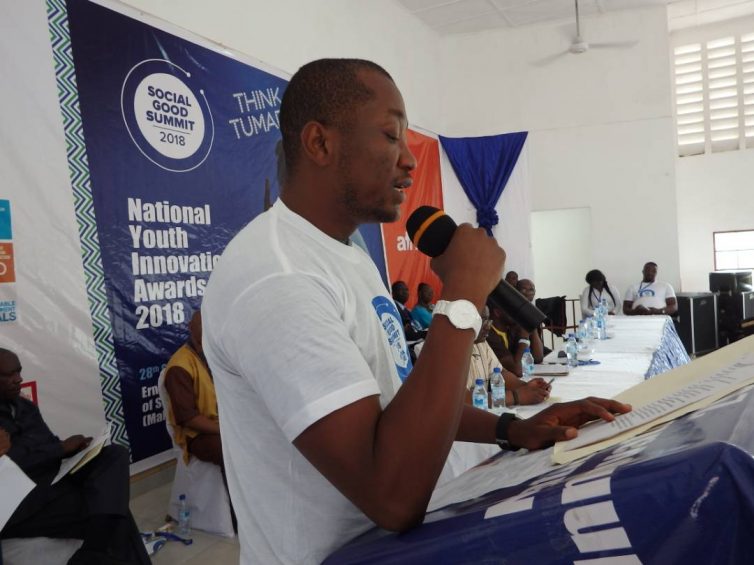 He made this call in Magburuka, Northern Sierra Leone during the 2018 national youth innovation awards which brought young innovators and artistes together.

The Minister said they were ready to create the platform and also throw the challenge to the youth.
According to him, “we are here to bring a change and allow young people to participate in national governance.”

Explaining the importance of the Social Good Summit, he said one of the key importance of this summit is that, it unites a lively community of global citizens and progressive thought leaders around a common theme: 2030NOW.

“This summit will not only help us to have a better world, but will also focus on how we can unlock technology’s potential to make the world a better place,” he added.
Minister Kallon went on to tell the jam-packed hall that, the Social Good Summit is here to promote a stronger engagement with the private sector in order to achieve the Sustainable Development Goals. He added that, it further creates the conditions for effective partnerships.

He described this year’s month (September, 2018) as a “very important week, month and year in the history of the United Nations.” He pointed out that world leaders were gathered in the United States of America to attend the 73rd session of the UN General Assembly.
They were gathered to debate on the theme: ‘Making the United Nations Relevant to All People: Global Leadership and Shared Responsibilities for Peaceful, Equitable and Sustainable Societies.’

This year, he stated, “our world leaders focused on 7 key priorities, namely: promote gender equality; promote and implement new global compacts on migration and refugees; highlight innovative thinking around the future of work; effort to protect the environment, particularly plastics pollution; raise awareness on persons with disabilities; implement the reform of the UN system; and promote peace.”
He assured that the Youth Ministry is open to any further partnership that will better the living condition of the youth.