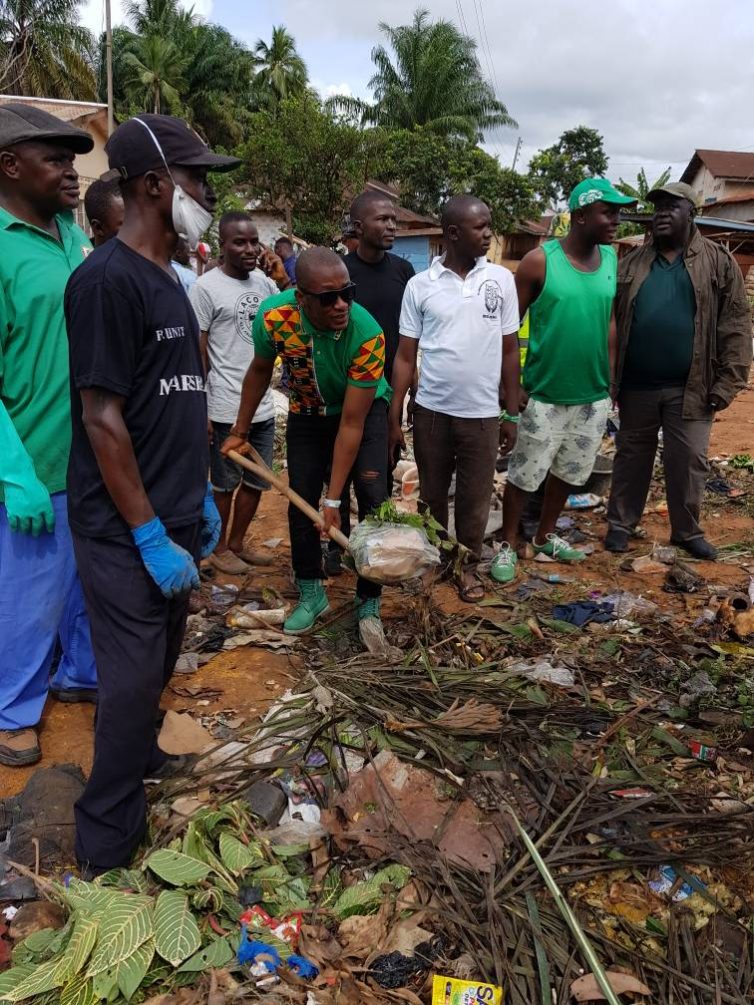 In a bid to have a healthy environment and dirt-free Sierra Leone, the Deputy Minister of Youth Affairs-Lusine Kallon has over the weekend-Saturday 2 June, 2018 joined residents of Bo City, Southern Sierra Leone to clean the entire township.

Motivated by President Julius Maada Bio’s Presidential Order which reintroduces national cleaning on every 1st Saturday in every month from 7am to 12 noon, the Deputy Youth Affairs Minister said, “I participated in the cleaning exercise because President Bio’s New Direction believes a healthy environment is a wealthy environment.”

According to him, many international indexes labeled Sierra Leone as the worst place to give birth and live. He said this unfortunate situation has been attributed to the poor sanitary condition in the country, “but under the New Direction we are ready to bring a positive report card that is different from those ugly reports.”

“We inherited an unhealthy environment especially in the country’s capital city-Freetown,” Minister Kallon said, adding that, “some medical practitioners have also confirmed that our country had not been able to escape from diseases such as cholera and diarrhea largely because of poor sanitation.”

He said President Bio values the precious life of every citizen and therefore he has waged war on poor sanitation.

The Coordinator Friends of Fatima Bio said he was pleased to see the Deputy Minister of Youth Affairs in their midst actively participating in the cleaning exercise.

Victor Moiwo-one of the founders for Youth In Action said, “what amazes us was his action to coordinate the entire cleaning exercise from New London, Soja Kill Rebel, Sewa Road, Shenje, Bojon Street and Fenton Road among others.”

Victor said he admired the camaraderie between the Mayor and the Deputy Minister of Youth Affairs.

Donations to youth volunteers by the Deputy Minister of Youth Affairs climaxed the cleaning exercise.