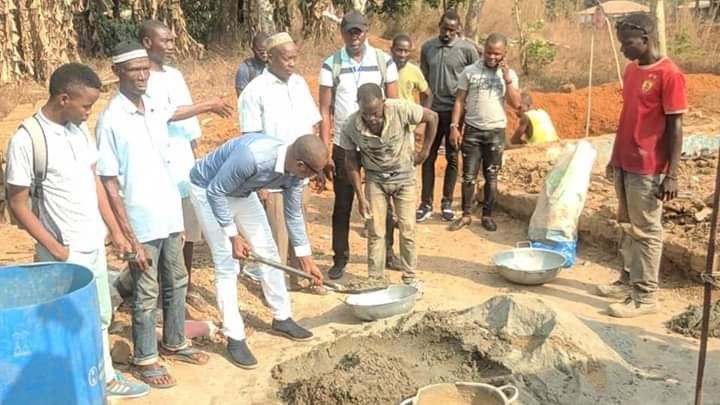 The Deputy Minister of Youth Affairs, Hon. Luseni Kallon, has turned the sod for the construction of a youth Market in Masalia Village about 1000 meters from the National Youth Farm.

The market is intended to serve as a platform wherein produce harvested from the farm can be sold.

In his statement, the Deputy Minister of Youth Affairs assured the youth that the construction of the market will ensure that the agricultural produce obtained from the farm will be easily and swiftly brought to the market. He added that it is one of the flagship programs of the New Direction government to ensuring that the mindsets of Sierra Leoneans change from that of dependency on imported rice to that of providing rice for self sufficiency.

“It is the dream of President Bio to see all Sierra Leoneans become self-sufficient in the area of food production and in feeding ourselves,” he said, adding that the seriousness demonstrated towards agriculture by President Bio is a clear manifestation that he is delivering on his manifesto of laying premium on agriculture as a way of food sustenance in the country.

Chief Pa Santigie Sesay appreciated the efforts of the Ministry saying that the market will aid the swift and easy selling of produce from the farm. He emphasized that the youth farm has been facing a challenge of the market site where their products can be sold.

Pa Sesay said he firmly believes in the commitments of President Bio and is a President that believes in agriculture and has delivered in most of his promises especially that which has to do with food sufficiency nationwide.

Councilor Abubakarr Bangura in Masalia Village also applauded the efforts of the government in relation to agriculture. As a Councillor from the ruling SLPP, he affirmed that it’s the first time such adventures have been taken by any government and insisted that the New Direction success in terms of service delivery in Sierra Leone is a must.

Frank Amadu Bio, the Field Manager for the Youth in Agriculture Project, referred to the construction of the market as a ‘farm gate’. He added that the initiative is to encourage the youth to sell their produce and be able to fend for themselves and their families. He added that it is the vision of the President to get the youths to attach in something meaningful instead of perpetrating violence in their respective localities.

He assured the youth that they will have total control over the market and no one will suppress them.