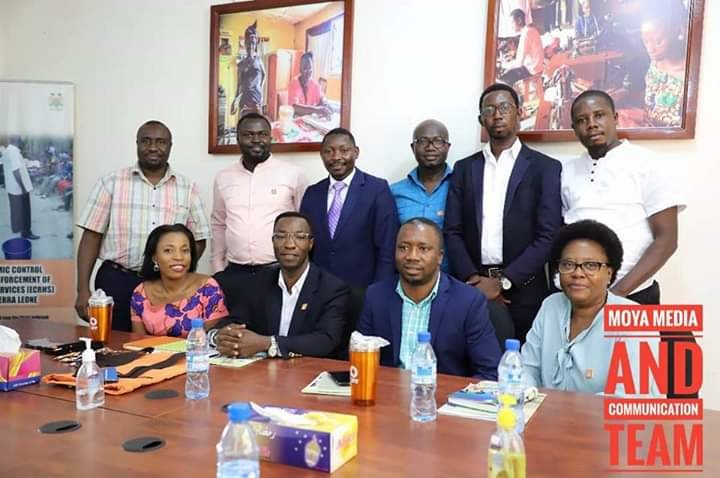 The Minister of Youth Affairs on 17th September 2018 was hosted by the CARE International Country Director and his team. The meeting was a very fruitful one and marked the beginning of a strong partnership, collaboration and a sustainable relationship between the two institutions.

The Country Director, Evariste Sindayigaya welcomed the Minister and his team and expressed immense joy that the Minister of Youth Affairs is the first Minister to have paid them a visit since the inception of the New Direction Administration.

The Minister of Youth Affairs, Mohamed Orman Bangura, outlined the many projects the Ministry is currently executing to help young people reap a Demographic Dividend from our current young population. He also explained to the CARE International team the challenges the Ministry is facing and workable solutions on how to address these daunting challenges. The Minister went further to request for partnership pact to be developed between his ministry and CARE International-SL.

The CARE International Country Director, Evariste Sindayigaya, expressed thanks and appreciation for the visit and promised to partner and collaborate with the ministry in some of the projects since theirs are also youth focused; prioritizing women and girls. The Country Director Stated that his Organisation is currently talking about transformative gender; “we are working with partners to ensure all policies are gender sensitive.” He went on to ask a very salient question: how can we fight poverty if we don’t involve the Youth by investing in same?

He also submitted that one of the core mandates of CARE International SL is to ensure that Youth fulfill their full potentials.

He revealed to the minister and his team that he has a very good news for his ministry and the Youth of Sierra Leone as the Canada ?? Fund for Local Partners/Institutions has agreed to Partner with them by building a Youth advocacy Network in the Western Area and the North that would  be charged with the responsibility of advocating for an end to Sexual and Gender based violence; other harmful practices like Female Genital Mutilation; and for the promotion of Sexual and Reproductive Health Education. He and his team, stated that they have been actively involved in livelihood activities to empower young people, especially women and girls within the country. They believe by investing in young people they are investing in the future.

He accepted the Minister’s request for a partnership pact to be developed between the two institutions as this will help in effective and efficient implementation of policies and programs for young people. He promised that his organization will help in addressing some of the herculean challenges in the Youth Ministry to help boost the morale of workers therein.

The New Direction is heading in the Right Direction with a committed, dedicated and visionary leadership that has not only prioritized addressing the challenges of youth but seen same as a security and development challenge.