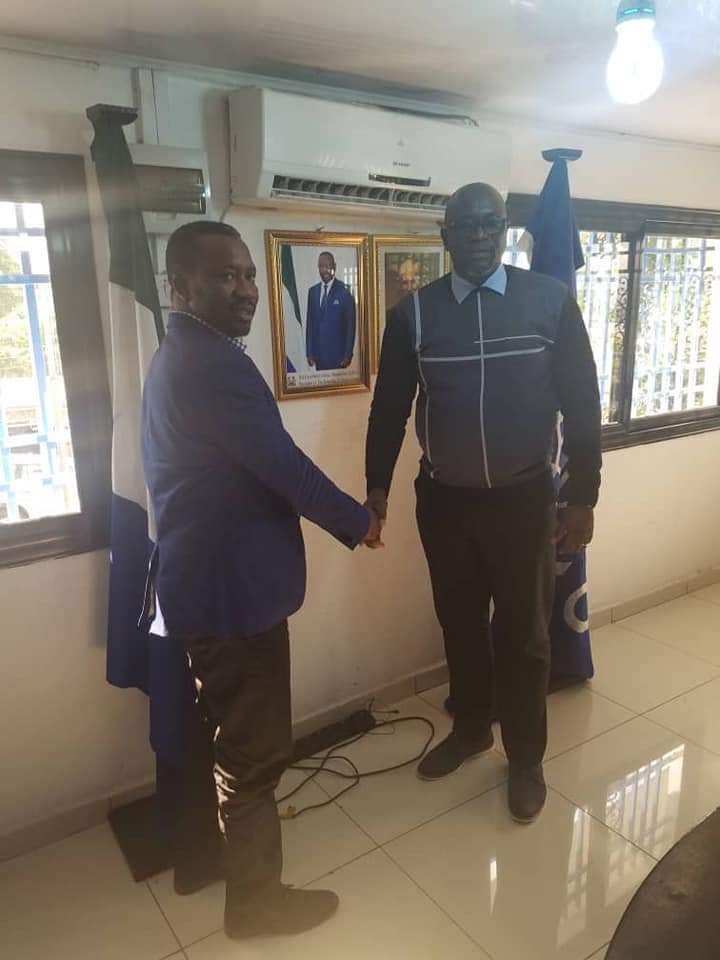 The Minister of Youth Affairs, Hon. Mohamed Orman Bangura, on the 5th of September 2018 paid a courtesy call to the International Organization on Migration (IOM) office in Sierra Leone. The primary motive of the visit was to create the platform for strong partnership, collaboration and coordination with IOM to ensure the two bodies formulate and implement policies that will help create safe havens for young people that will be safe enough to keep them in the country rather than risking their precious lives on the Mediterranean Sea in search of safe havens in Europe and America.

Mr. Sanusi Savage, country director of IOM Sierra Leone, welcomed the Minister and stated that he was pleased with the move and promised that urgent measures will be put in place to create a solid partnership that will give birth to beautiful and transformative policies geared towards solving the youth migration menace bedeviling the nation.

The Minister of Youth Affairs reminded that, “It is very clear that no one institution survives alone without linking with others. He went on further to reveal that,  “As a government Minister dealing with young people, and poised to see how donors and other agencies could come in to help solve the  challenges of young people in Sierra Leone,  I have therefore approached you to  seek help in  giving hope and opportunities to the youth of our beloved nation. We as a nation want to see that the idea of young people crossing the Mediterranean Sea becomes a thing of the past”.

The Hon. Minister having rolled out government plans and activities called on IOM to help establish Vocational and Technical Skills training centers for the Youth of Sierra Leone which will drastically reduce the number of unemployed youth roaming the streets or waiting for the slightest opportunity to leave the country, regardless of all known hazards. He requested that our Youth be provided with the required skills for socioeconomic development and that in the United Nations’ spirit of “leaving no one behind” they should be given opportunity and the right platform to actively participate in the achievement of the Sustainable Development Goals of the United Nations. This, as he submitted, is the only reliable way of setting the stage for the kind sustainable growth and development that will give assurances to young people. And this, as he succinctly expressed, will help prevent “Temple Run” on the Mediterranean Sea.

Mr Sanusi Tejan Savage in his response stated that his organization works with government and other stakeholders on Migration issues. And that IOM has supported several Ministries and Agencies across the country and now that the Youth issue is becoming a security and development challenge, they would immediately come in to help the Government and the Ministry of Youth Affairs.

Among the highlights of the meeting is that the IOM will be using its”  “Diaspora to Invest in Sierra Leone” program that holds on 18-19th September, 2018 as a platform to create jobs for the youth of the country.

Mr. Sanusi Savage went further to reveal that the Technical Vocational Skills Training programs will be supported to enhance youth employment and that “arrangements are in place to provide automatic jobs for them upon the completion of training.”

The Head of Office IOM stated that having listened to the Minister of youth, they now have a breath of fresh air, as his speech has clearly manifested his determination to uplift the status of the youth of his beloved country.

The meeting marked one in a series of meetings the Minister has held with key stakeholders since his appointment. And they are a fine demonstration a New Direction in Youth affairs unique in its  ruthless quest for fulfilling its promises by means of restless development is at hand.