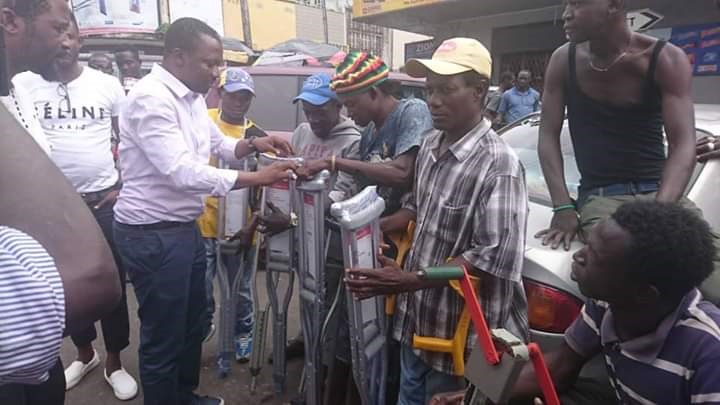 Even though he had some other schedules he wanted to address around the capital Freetown, the physically challenged persons see a hope in the Minister of Youth Affairs, Hon. Mohamed Orman Bangura. Today, Thursday 30th August, 2018, the minister ran into by several youth at the Central Business District –Sweissy. Being a man who is passionate and sees the plights of the physically challenged as a concern, he made a stop to them to talk with the few he ran into. During this, the Hon. Minister decided to donate few clutches to these gentlemen around Howe Street, opposite the Union Trust Bank.

These gentlemen appreciated and thanked the minister for such a gesture.

Whilst talking to the minister, they clearly stated that the minister has really proven to them that he love and appreciate the disabled community. This they said was as a result of what they see him always doing any time he sees them along the streets of Freetown. They pleaded that the minister should help the world know their conditions and serve as an example to many who are in positions of trust.